The USA and Norway are both democracies. They both have elections, a three-way separation of power and freedoms like freedom of speech (the freedom to say what  you want) and rule of law (all decisions, court rulings and punishments have to be based on laws). However, Norway and the USA are still very different.

How the USA as a nation is governed

The government for the whole of the USA, not just each state, is called the federal government. It is based in Washington DC, and Donald Trump is President. (But you knew that…!)

However, the President does definitely not have all power. The power is divided in three «branches»: the legislative, the executive and the judiciary.

The reason for this three-way split is to avoid that one person or a few persons get too much power. Therefore, all these three have power over each other, so there is a kind of balance:

Here is an infographic that tries to explain how power is distributed and how the three «branches» have power over each other:

Because of the way it is designed, this system has sometimes made it very difficult to get anything done when the President is from one party and Congress has a majority from the other party. Congress refuses to pass the President’s suggestion for laws, spending and taxation, the President refuses to sign Congress’ bills into law. This situation is called «gridlock» and has been the situation under the previous president, Barack Obama.

However, because of the President’s responsibility for national security and foreign policy, he can make a lot of decisions without Congress. If something has to do with national security and foreign policy, the president has the power to decide himself. Under Obama, the US made a deal with Iran in which economic sanctions were removed if Iran promised to end its project to get nuclear weapons (and allowed in inspectors to check it). Under Trump, the US has imposed tariffs (toll) on products like steel and aluminium from other countries and made some changes to immigration policy. The presidential actions work like laws in many ways, except they can be removed as easily as they were made. Donald Trump, for example, made the US withdraw from the Iran nuclear deal and the Paris Climate Accord. Trump didn’t need Congress to do that, because the decision to join these agreements was made by President Obama without Congress. 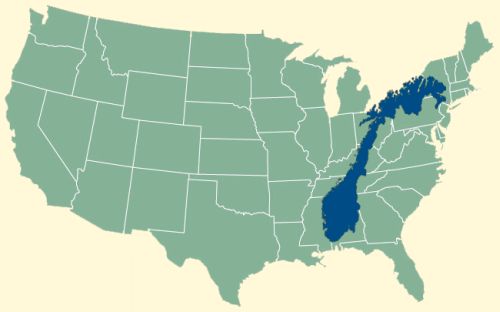 The USA is a far bigger country than Norway. It consists of 50 states, which have quite a lot of independence, and most of which are bigger than Norway either in surface or population. These states can make their own laws, for example: age limit for drinking alcohol and getting a driver’s license, what will be taught in schools, how strict punishments there should be for crimes, whether there should be death penalty or not.

Each state also has a three-way separation of power, like the USA as a nation (and Norway):

Here is a «Venn-diagram» comparing the American and Norwegian political systems. No comments yet
civics for dummies kortversjon USA